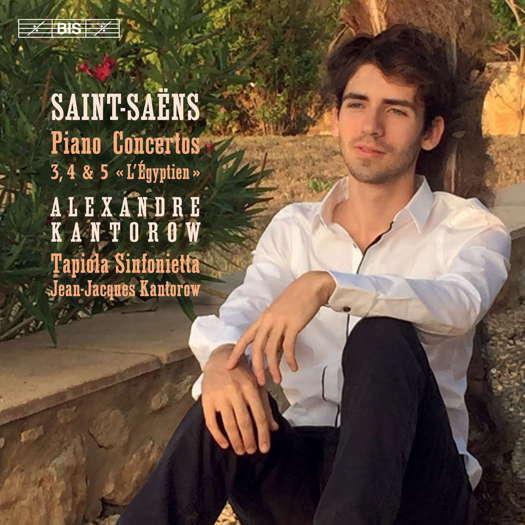 GERALD FENECH listens to Piano Concertos 3, 4 and 5 by the enigmatic Camille Saint-Saëns

'Alexandre Kantorow performs these highly attractive concertos with terrific panache, energy and a forward-thrusting momentum that make the whole project deeply distinctive while respecting throughout the composer's imaginative and innovative bravado.'

Camille Saint-Saëns, by the grace of God, a composer. Well, not really, as this enigmatic artist was many other things. Archaeologist, astronomer, botanist, philosopher, historian, animal lover, poet and playwright, among a host of other occupations ... Saint-Saëns was a uniquely gifted individual mixing with the great scientific minds of his age, and internationally he was the most famous French musician in his lifetime. Acclaimed in North and South America, the Middle East and the great capitals of Europe, this composer left behind a huge musical legacy covering all genres.

What a pity that nowadays only a handful of his works remain in the repertoire. Even his most famous opera, Samson et Dalila, has lost much of its past popularity. Saint-Saëns' life covered most of the nineteenth century and two decades of the twentieth (1835-1921), but he was never a true romantic. He defended the music of such revolutionaries as Liszt and Wagner, composed the first film music and was admired by such gigantic figures as Berlioz, Debussy and Ravel.

This superb issue focuses on the last three of his five piano concertos. During his time this genre was neglected in France, but he revitalized it, regarding formal balance and a sense of moderation as more important than expressivity. Composed in 1868, No 3 in E Flat (1868) was criticised for its lack of virtuosity, but Saint-Saëns cleverly avoided the Romantic model by not falling into the trap of letting the soloist display pure virtuosity while the orchestra is reduced to just a mere accompaniment. Instead, he offers a genuine symphonic fantasy with piano.

Composed at the zenith of Saint-Saëns' orchestral production, the Fourth concerto in C minor made its bow in 1875, and comes after his first three symphonic poems. Alfred Cortot, who discussed the piece with the composer, said that this concerto is the 'finest work Saint-Saëns ever wrote for the piano'. Indeed, its rhapsodic style reminds one of Liszt, and the dialogue between piano and orchestra comes across as free, quasi-narrative and bordering on improvisation.

Showered with fame and success, Saint-Saëns decided to compose a fifth piano concerto twenty-one years after the previous one of 1875. The Fifth in F, premiered on 2 June 1896, was a celebration of his fiftieth year as a musician and bears the subtitle 'Egyptian', a reference not only to the place it was composed - Luxor - but also to the second movement which portrays a sort of oriental journey that goes all the way to the Far East.

The piece ends with an exuberant finale describing the joy of a sea voyage.

Alexandre Kantorow performs these highly attractive concertos with terrific panache, energy and a forward-thrusting momentum that make the whole project deeply distinctive while respecting throughout the composer's imaginative and innovative bravado. The finale to the fifth in particular has that dash and verve that the score clearly invites.

Jean-Jacques Kantorow and the Tapiola Sinfonietta offer sympathetic support. An excitingly refreshing addition to the Saint-Saëns discography in detailed notes and exemplary sonics.

The background image on this page is derived from a detail from a 2009 photo of the hypostyle hall in the Karnak Temple complex near Luxor, Egypt.