VIDEO PODCAST: Find out about composers from unusual places, including Gerard Schurmann, Giya Kancheli, Nazib Zhiganov and Nodar Gabunia, about singing in cars, and meet Jim Hutton from the RLPO and some of our regular contributors in this eighty-minute February 2021 video. 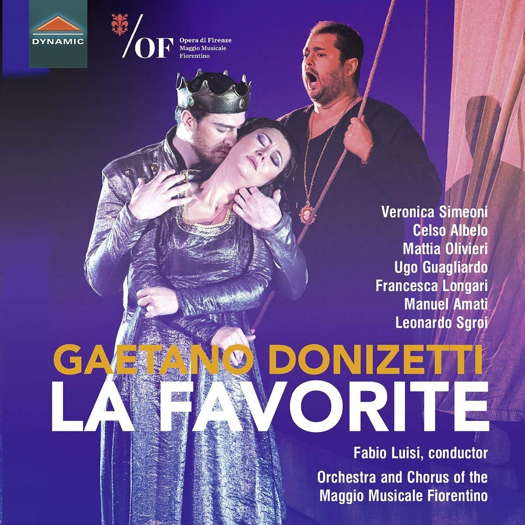 '... Fabio Luisi projects the score with refinement and character.'

A number of mainstream 'Italian' operas actually began life speaking French. Verdi's Don Carlo was originally Don Carlos, and I Vespri Siciliani first hit the boards as Les vêpres siciliennes. (The process went both ways: Il trovatore was tweaked and slightly rewritten for the Paris Opera's Le trouvère, while I Lombardi would be substantially recomposed as Jérusalem.) Before that, some of Donizetti's operas travelled a similar path. La fille du régiment was, until the mid-twentieth century, performed as La figlia del reggimento (when it was performed at all -- those nine high Cs, y'know). La favorita is less central, clinging to the margins of the repertoire, but it was originally the French La favorite. The Dynamic issue, documenting a 2018 Florence performance, allows us a rare opportunity to hear the work as the composer and his librettists originally intended.

Reverting to the original French libretto changes the character of the music, even if the score has remained the same in both versions. The more immediate, 'spoken' quality of the language infuses the impassioned music with a measure of restraint. French vocal techniques, too, based on the language's frontal placement, generally produce lighter instruments than does Italian training; ironically, however, all the participants in the Florence performances, including the conductor, appear to be Italians or fellow-travelers!

That conductor is an important contributor to this recording's success: Fabio Luisi projects the score with refinement and character. The Prelude is brooding; the orchestral introduction to Inès' little choral song is graceful; the various marziale (or martial) passages are buoyant. At the same time, Luisi doesn't ignore, or shortchange, the music's full-blooded Italianate roots: the second- and third-act finales roll along, building steadily.

The conductor plays the big set pieces with real insight. Spirto gentil, as the big tenor aria normally goes, can fall into a sort of gummy stasis; here, Luisi invests it, as Ange si pur, with a steady two-in-a-bar flow, with some effective segmented phrasing to the coda. And the buoyant lift with which he invests the cabaletta of O mon Fernand compensates for any slight loss of sweep.

Those romantic leads are strong, but variable. Veronica Simeoni's Léonor sounds clear and flexible at the start, predictably lighter than most Italianate Leonoras. She projects a lovely soft ambivalence in Act Two, but lets other lyric lines droop. The top goes whoopy in O mon Fernand, but then both ends of the range sound bottled-up in the cabaletta. She finally re-warms into shiny tones, and a lustrous top, in the last finale. (Her Inès, Francesca Longari, is chipper and not too chirpy.)

The Fernand, Celso Albelo, occasionally phrases heavily - although he shapes the lines well - and nasalizes or shallows some vowels where he does attempt to lighten. Elsewhere, however, he flings out some impressively ringing phrases, and attacks the last finale boldly. In the first finale, Albelo pushes on the top note the first time around; on the repeat, approaching it from a higher repointing, it spins more.

The high C in the aria is fine, if a bit anxious. Albelo fumbles a few words, and a few vowels, from time to time.

The rest of the men register variously in the debit column. Manuel Amati's relentlessly forward buzz - a more Gallic sound, in its way, than everyone else's - is perhaps appropriate for the scheming Don Gaspar, but that doesn't make it easier to listen to. (The role primarily exists to supply a tenor in the second finale, while Fernand is off somewhere.) Mattia Olivieri's firm baritone is good for Alphonse, but his inflections are dull, and he keeps dragging the beat in Act Three. (In fairness, Albelo falls behind once or twice as well.) Ugo Guagliardo, a lighter, more supple bass than usual for Balthazar, sometimes falls in and out of his resonance in an almost amateurish way.

The pit orchestra could use a few more desks of strings - I've been spoiled by studio recordings with full-sized orchestras - but, within sections, the strings are vibrant and unified, and the ensemble sound is clean and compact. The chorus is woolly. The sound is clear, registering the brass choir in Act Four with impressive depth; the organ in that same act sounds muffled compared to the pit instruments, which may faithfully represent the actual house sound.

The booklet includes a tracked French libretto - which sometimes differs in details from what we actually hear - and its English translation, set side-by-side. Track 15 on the second disc, Ange si pur, should have begun with its recitative, La maîtresse du roi; as it is, the latter is tucked into the end of the previous track.

The background image on this page is derived from an 1840-1 lithograph of Gilbert Duprez as Fernando and Rosine Stoltz as Leonor de Guzmán in Act IV of Gaetano Donizetti's La favorite at the Salle Le Peletier in Paris, by Pierre-Émile Desmaisons (1812-1880) after François Gabriel Lépaulle (1804-1886).