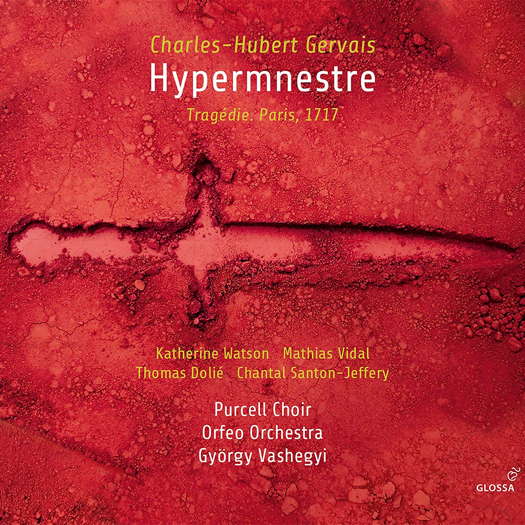 'Vashegyi marshalls his moderate forces with a caring deftness that betrays his sense of purpose and engagement with Gervais' score. Indeed, this is a deeply intelligent and attractive performance that should arouse the fresh sense of investigation which it so richly deserves.'

In his heyday, Charles-Hubert Gervais (1671-1744) was one of France's foremost baroque composers and his works were highly popular among both mundane and aristocratic audiences. But by the time of his death, the classical era was setting in and musical tastes were changing. For Gervais' music this did not augur well and his works soon fell into oblivion, even up to the present day. Indeed, recordings of some of his pieces can be considered an event, so this historic set of, maybe, his best composition, is more than welcome.

This tragic neglect presents something of a paradox inasmuch as Hypermnestre was one of the pillars of the 'Academie' (the Opera de Paris) for half a century. Premiered on 5 November 1716, it was subsequently revived in 1717, 1728, 1746, 1765 and 1766. So even twenty-two years after Gervais' death the opera still held its own, even in the face of Rameau's famous stage-works and also those of his contemporaries.

Critical reaction of the time also promoted the passionately dramatic power of Joseph de La Font and Simon-Joseph Pellegrin's libretto. The act of focusing the plot around the three principal characters - Hypermnestre, her father Danaus and her lover Lyncee - generates vivid interest and allows for a nuanced psychological portrayal of the heroine and her inner turmoil.

Furthermore, La Font greatly succeeds in incorporating the 'divertissements' very harmoniously into the unfolding course of the drama by creating areas of tension and preparing expectations by providing an outburst of magnificent ceremony and visual spectacle.

In a general way, Gervais' music exposes his wonderful qualities as a melodist, a master of harmonic invention and an orchestrator of the highest order; all the necessary ingredients to describe in music a story of love, intrigue, cruelty, murder and betrayal supervised by the gods of ancient Egypt, particularly Isis, the restorer of peace and love.

The recreation of Hypermnestre has required years of investigation and research, a labour of love undertaken by Julien Dubruque and Thomas Leconte, through whose heroic efforts we can now appreciate one of the great operatic masterpieces of the French baroque. Vashegyi marshalls his moderate forces with a caring deftness that betrays his sense of purpose and engagement with Gervais' score. Indeed, this is a deeply intelligent and attractive performance that should arouse the fresh sense of investigation which it so richly deserves.

Great sound presence and an engrossing essay complete an issue of inestimable value to the operatic catalogue.

The background image on this page is derived from a fifteenth or sixteenth century artwork by an unknown author, representing Hypermestra, daughter of Danaus, and one of the Danaïdes, in Greek mythology.