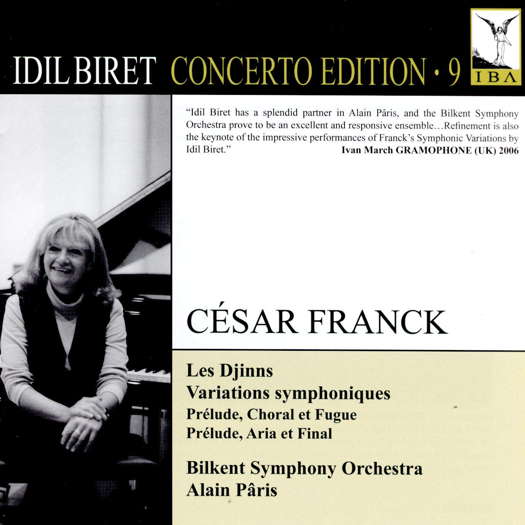 Nothing Short of Heroic

'My impression is that Biret does not only interpret these works but she reincarnates them.'

César Franck (1822-1890) is widely considered as one of the most influential nineteenth century French composers. Indeed, he was not French by birth, being born to parents of German stock in Liege, Belgium. He only became a full French citizen in 1873. A child prodigy, he studied piano and organ, but his career as a travelling piano virtuoso was a flop, and it was only as an organist that he finally made a name, settling in France as a teacher and organist. The Paris church of St Clothilde, with its magnificent Cavaillé-Coll organ, became his home and, up to the very end of his life, Franck and St Clothilde were one and the same thing. Like Bruckner and Messiaen, Franck was a devout Catholic who invested his music with an intense spirituality that was matched in his personal life by an almost saintly innocence.

His output, which is quite modest, includes symphonic, chamber and instrumental works, apart from some beautiful songs and inspiring oratorios, but the most often performed are his piano and organ pieces. This ninth volume in the Idil Biret Concerto Edition is unique in every sense, if only for the mesmerizing pianism of Idil Biret.

Les Djinns (1884) and the Symphonic Variations (1885) are both composed for piano and orchestra, but they could not be more different in what they want to convey. The former is a vivid description of a poet haunted by vampires and dragons who finally survives the ordeal.

The latter is a showcase for some truly astonishing and dynamic contrasts as one variation follows another without a break. Rightly so, these variations are undoubtedly the composer's most popular piece.

The two other items on the programme, the Prélude, Choral et Fugue (1887) and the Prélude, Aria et Final (1889) are both for piano solo. One of Franck's most impressive characteristics is his skill of varying one or two motifs at a time and forming a whole new structure out of them. These two works can be considered as prime examples of this, among his other mature solo piano works.

Idil Biret's interpretations are nothing short of heroic and one can only marvel at the fluency, power and precision of her playing. My impression is that Biret does not only interpret these works but she reincarnates them. Indeed, one gets the feeling that Franck himself was playing through her. Excellent sound quality and instructive annotations complete a disc of the highest artistic quality.

The background image on this page is derived from La Cathédrale de Rouen by French painter Paul de Castro (1882-1939).