SPONSORED: The Many Hats of Allan Rae - A Birthday Greeting, by Endre Anaru.
All sponsored features >> 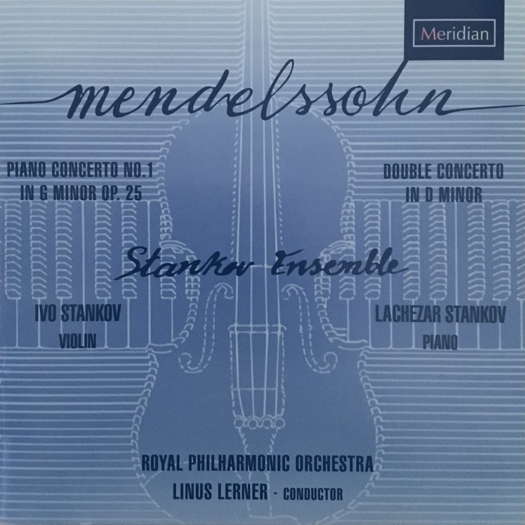 Mendelssohn concertos from the Stankov Ensemble
and the Royal Philharmonic Orchestra,
highly recommended by GERALD FENECH

Mendelssohn is the Mozart of the nineteenth century, the most illuminating of musicians who sees more clearly than others through the contradictions of our era and is the first to reconcile them.

This was the description by Robert Schumann regarding Felix Mendelssohn after he heard the latter's Piano Trio No 1 in D minor. Born in Hamburg in 1809, Felix was the second of four siblings of a wealthy banker. He was a child prodigy and superbly gifted, infusing his compositions with an unmistakeable personal voice, flowing with clarity, intelligence and an abundant melodic lyricism. He composed prolifically from childhood onwards, and by his mid-teens he had written a dozen string symphonies, a substantial amount of chamber music and several concertos. These works were performed in private soirees in the family's home, and some even reached the public concert hall, but soon they vanished from the scene. The composer was very wary on what to publish or not, and he often revised even complete scores, but there were occasions when this did not come about, and a large number of these works remained unpublished for decades.

The Concerto for Violin and Piano in D minor was discovered in the Berlin State Library in 1950 but it has been slow in gaining a foothold. This may be partly because of the demanding solo parts, which require split-second co-ordination between the musicians as well as the composer's characteristically fleet-fingered style.

At nearly forty-two minutes the work is full of high spirits and dazzling virtuosity, offset by a warm and radiant duet between the soloists in the 'Adagio'.

The First Piano Concerto was written when Mendelssohn was twenty-two and was premiered during a tour in 1831. Unsurprisingly the composer was both the soloist and the conductor, and it soon became the favourite choice of Clara Schumann and Franz Liszt. The Concerto's three movements are performed without a break and, while the music is fresh, streamlined and inspired, the soloist is given ample opportunity to display his abilities. Indeed, the work is full of melodic wonders and unexpected twists and turns that never fail to surprise.

The background image on this page is derived from a nineteenth century lithograph of the Alte Museum in Berlin by J Schroeder.