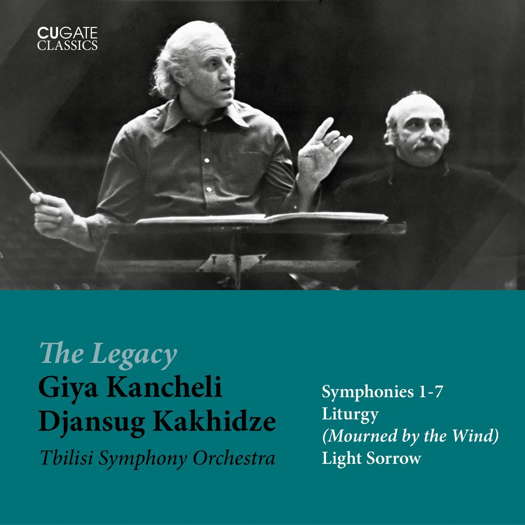 Metamorphosis of a Georgian Soul

'... a unique symphonic expression of the Georgian experience ...'

Cugate Classics' new release, Giya Kancheli: The Legacy Box Set, is a set of the complete symphonies (plus two other large-scale works) by the prominent Georgian composer Giya Kancheli (1935-2019) as performed by the Tbilisi Symphony Orchestra under the baton of the composer's lifelong collaborator Djansug Kakhidze (1936-2002). This release presents the material over five disks with separate accompanying liner notes written by various contributors. The recordings themselves are newly remastered from the 1994-1995 originals. As a novel retrospective of Kancheli's entire symphonic output, the box set presents a unique opportunity to examine this body of work holistically. Rodion Shchedrin is often quoted describing Kancheli as a 'restrained Vesuvius', and the liner notes of the first disk summarize his symphonic oeuvre as 'a gradual path to overcoming his own intensity'. I propose, however, that this release encourages another potential way of hearing Kancheli: not as an intense soul learning to sing quietly, but as a quiet soul learning to use intensity as something against which to sing.

While the liner notes contain a few passing references to the context of Kancheli's homeland, I think it is worth bearing in mind some additional background information about Georgia and its music, which I first came to know through other research projects. Georgia is a country whose people, culture, and history still remain largely unknown in the West, partly because its distinct identity has been so often eclipsed through political domination by neighboring powers over the millennia, including most recently the Russian empire and the USSR. This is evident even in the normal English spelling of Kancheli's name, which is actually based on the Russian version of his name and not the native Georgian version. (Georgian is completely unrelated to Russian and considered to be from an isolated language family unique to the Caucasus.)

The traditional music of Georgia is equally extraordinary. Although it shares with the Western art music tradition an analogous heritage in medieval Christian polyphony, it has since evolved within a completely different culture of harmonic and contrapuntal thought - one in which scales can repeat at the fifth (do re mi fa sol) instead of the octave (do re mi fa sol la ti do), harmony can project downward from the top voice instead of upward from the bass, and traditional tuning is based on models without a true equivalent in Western thinking. The result is a landscape of music which to Western ears might seem foreign yet distantly familiar, almost avant-garde in its apparent harmonic edginess but with roots that are humble and ancient. Tragically, these diverse sacred and secular traditions suffered under Soviet rule, as did the dialogue with modern innovations in Western art music. By the 1960s, however, things were starting to open up again, and a flood of newer Western developments began pouring into the palettes of Soviet composers. This is when we first meet Kancheli the symphonist.

Symphony No 1 (1967) presents us with an example of this sudden influx of Western modernism after a half-century of isolation. Atonality blends in a continuum with polytonality while pointillism, lyricism, and militant percussiveness compete for textural dominance on a common plane. Rhythmic and melodic themes, when introduced, are fragmentary and elusive. This creates an overall sound world which is uniformly complex, angular and unsettled, even beneath the prolonged moments of surface calm.

Georgia was being opened not only to the West, however; it was also being opened to itself. In 1968, the liner notes tell us, Kancheli had something of a transformative experience upon hearing traditional Georgian Orthodox chant for the first time. (The first Soviet-era book of these chants had just been published.) From this point onward, Kancheli's symphonic voice begins to take on a new evolutionary path that will continue over the rest of his life: an emerging journey of disrupted contemplation.

Symphony No 2 - 'Chants' (1970) shows Kancheli beginning to separate his orchestral palette into two realms: a quiet and contemplative persona conducive for communicating the audibly 'Georgian' elements he has encountered in the traditional music of his people, and a contrasting persona which seems to diametrically oppose and violently disrupt them. Pentachordal melodic fragments, quintal harmony, and chorale-like textures live and breathe in the contemplative realm, and their life there will continue to develop in richness and complexity over the subsequent symphonies.

Symphony No 3 (1973) follows with the inclusion of a literal Georgian voice, a folk singer. The liner notes explain that Kancheli's decision was inspired by hearing a field recording of a funeral lament from Svaneti, a mountainous region in northern Georgia. 'One of the mourners was leading,' the notes quote him as saying; 'the others were picking up, but a little differently, slightly off key. Then she started again a little higher, sometimes falling just short of a full tone or a semitone.' I surmise here that Kancheli was likely hearing traditional tuning in the recording, since the isolated terrain of Svaneti is known to have preserved older folk traditions better than elsewhere in Georgia. In any case, the symphony plausibly recreates the effect described, both in the orchestration and in the wordless song of the solo voice.

Symphony No 4 (1974), though composed in commemoration of Michelangelo's quincentennial, finds the composer further infusing traditional Georgian elements into the contemplative realm, including fifth-repeating scales and timbres recalling folk instruments.

As the years pass, the contrast grows between Kancheli's contemplative and disruptive realms. The disruptive moments become more isolated, explosive, violent and grotesque while the contemplative realm becomes quieter and more serene and mystical. Something else also emerges in the contemplation, however: a sense of agency. Symphony No 5 (1977) introduces the harpsichord to Kancheli's orchestral palette. Here the instrument plays an idée fixe, a sweet and fragile theme in an uncharacteristically neoclassical style, constantly interrupted by furious orchestral outbursts and forced to repeat from the beginning each time. The effect is almost reminiscent of a young music student determined to work through a lesson as a war rages on outside. This is in stark contrast to the passive witnessing of abstract forces suggested in earlier symphonies.

In Symphony No 6 (1980), silence itself becomes an essential element of the contemplative realm, here punctuated by a glacially pulsing folk-like motif on harp and flute with spectacular effect.

The emerging dichotomy of the two realms comes to full maturity in the final three works presented in the box set: Symphony No. 7 - 'Epilogue' (1986), Light Sorrow (1985) for two solo voices, children's choir and orchestra (with poetic text by Shakespeare, Pushkin, Goethe and Tabidze), and Mourned by the Wind - Liturgy in Memory of Givi Ordzhonikidze (1986) for viola and orchestra. The latter two see Kancheli expanding his symphonic idiom beyond the symphony per se, blending choir and electric bass with the existing orchestral timbres of his contemplative realm where traditional Georgian elements live and breathe in quiet resolve, undeterred by the looming threat of violent orchestral disruptions.

In summary, the Legacy box set conveys a vivid story of an emerging meta-conscious mystic whose song is not of restrained fury, but rather of enduring gentleness in the face of fury.

It remains a unique symphonic expression of the Georgian experience unlike those of most other Georgian symphonists I have heard before - eg Taktakishvili, Nasidze and Tsintsadze. For these reasons, and because the performances are by the ensemble and conductor for whom the works were envisioned, I consider this release an essential statement of Kancheli's symphonic 'legacy' indeed.

The background image on this page has been derived from an 1858 photo of the Orthodox Christian Svetitskhoveli Cathedral in Mtskheta, Georgia by Alexander Ivanitsky.